Because no vacation is complete without….

A ride in a tow truck.

A relay across three states to get me home.

It was Thursday morning, and I was driving in Milwaukee on my way to Dunbar. I was in the middle lane on the interstate, driving behind a bus for a while. Then the bus moved to the left, and before I knew it, I was between the back end of the bus and the back of a box truck. Soon as I thought, I need to get out of this, the bus started moving over to my lane and it was going to ram into my driver’s side.

I thought I was going to get squashed, and it was halfway in my lane when I honked the horn, moved over to the right and hit the metal piece on the end of the box truck with my passenger side and started fishtailing and swerving for a good distance. There was a concrete wall on the left two lanes away, and I was conscious of having to stay away from that. But there were no cars around me, and once I got mine back under control, the box truck and I went over to the shoulder and then got off the freeway. The bus didn’t stop.

I shook badly, but I wasn’t hurt. While we exchanged insurance information and waited for the police, the box truck driver asked what I was up here for, and I said, “Vacation.” He looked at me somewhat incredulously, and simply said, “Oh, ok,” as if he was thinking, “What in the world are you coming up to cold Wisconsin for vacation for?”

The answer is, cheese curds.

The damage wasn’t much, considering what could have happened.

I told myself, You have to get back on the horse, and was able to drive my car the rest of the way up eastern Wisconsin (even stopping to see Lake Michigan) to Dunbar, where I parked and went promptly to a play my friend’s student was directing, Cheaper by the Dozen, at the university there. It was about time, and the timing could hardly have been more perfect. The father’s time was short, and during the play, I thought about the wreck and how the million things that could have gone more wrong didn’t happen. I felt subdued, and my excitement from the day before of my first real vacation from my first real job was buried.

That night, my friend and I went to a local restaurant that served pasties, a delicacy I had learned about (but never eaten) my junior year of high school. I ordered one, and then my nose started bleeding and my head pounded. Thinking it was just a fluke, we continued on with our evening plan of watching a movie.

The next morning, the headache was back, and so was the nosebleed. My shoulders, neck and back ached. The campus nurse said we needed to go to the ER to see if it was a concussion (if it was, that would have made Concussion #3). So we headed north to Michigan’s Upper Peninsula to the nearest hospital (45 minutes away).

The nurse promptly put a stiff neck collar on me, and had me lay in the back while I waited for an MRI. My friend came back with me. She had just received a new book in the mail, and once my head had been scanned and we were waiting for the results, she started reading it to me. (It’s great having someone who is skilled in the theatrical arts read to you.)

I didn’t have a concussion or any serious injuries, so I was released to go and given a muscle relaxer (side effects may and did include dizziness and blurry vision). I sure slept well that night.

The next day was Saturday, and it was the first time I really was able to do something touristy. My friend and I packed a picnic and loaded the car with food. We headed north in search of Lake Superior. However, I had not calculated distances correctly, and we did not reach the north coast of the Upper Peninsula. We did find a beach along a bay near Balaga and picnicked there, taking a lot of pictures along the way.

And then, we decided to travel home so we could make it back for the third showing of Cheaper by the Dozen. All of a sudden, my friend’s cruiseless car started cruising without the foot on the gas pedal. She pulled over and shut the car off to see what happened, but when she tried to start the car again, all that happened was a harsh grinding sound. We were stuck. And we had to call a tow truck.

It was actually great fun to ride in the tow truck. All that diesel smell brought back good memories for the two of us farm girls. 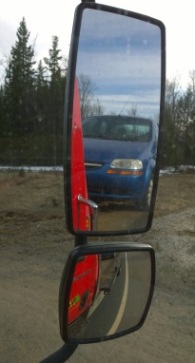 We made it back for the play, and I enjoyed some comedic relief to end a tempestuous vacation.

When I first started back home on Sunday afternoon, my mind flashed back to Thursday, and I could see a bus and a truck on my left and right sides. I became scared again.

They are not real. You are on a two-lane highway, not the interstate. Get back on the horse.

Because of sharp pain in my back, I only drove to Oshkosh, where friends from Milwaukee met me to drive my car down while I slept in the back. Then, we met up with some friends from Lafayette, who had come up to help with the third leg of my journey. In this relayed way, I made it to my house, where my parents picked me up to take me to the farm.

It’s going to take a while to recover from the neck, shoulder and back pain. Driving, sitting and standing is pretty painful right now. Icing my muscles and a visit to the chiropractor will help.

In all of this, there is a lot to be thankful for: it wasn’t worse, my car still runs, being connected, friends who are willing to make a relay chain across three states. Being able to see two of the Great Lakes (which makes four in less than a year).