Along with speaking to a group at the 4-H science workshops about my blog (that was pretty cool), writing a freelance article, and other various and sundry tasks, I’ve been in the field a lot over the last two weeks. Almost all of it was raking hay, although I had about an hour and a half where we were loading up small square bales. This time of year, we’re mostly doing round bales since it’s first cutting hay (usually lower quality than second and third cuttings taken later in the summer), but we put up around 75 small bales for a neighbor.

And it was downright hot. I don’t usually wear a hat, but this time I did. Most of my baseball caps are black Purdue marching band hats or a black Progressive Dairyman cap I received for having an article in their magazine a while back. But black is not the most favorable color for being in the sun, so I showcased my white Penn State snap back hat, which is supposedly very cool and hip.

With my sunglasses, hat and ear plugs, I felt like I was stylin’. Or in my own little world. They were good ear plugs.

So I had that pretty much brand new hat, but we had to go back to our old rake because the hydraulic hose on the new one gave out. “What’s old is new again,” as the saying goes. I had never used this particular rake before and so had to learn how.

It was easy to catch on. This particular implement uses no hydraulics, just a gear snapped into place. After I’d run the tractor and raked through the hay for about 50 feet, I stepped off the tractor and adjusted the rake. I used the red handles to lower the tines as they weren’t picking up the hay as they should. 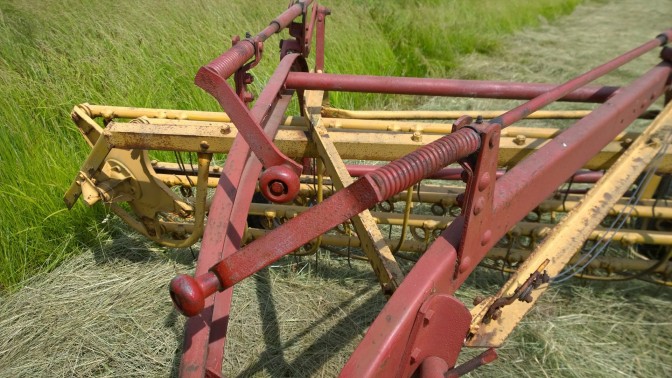 And I’d take a look at the tines to see if they were close enough to the ground to pick up a majority of the hay. 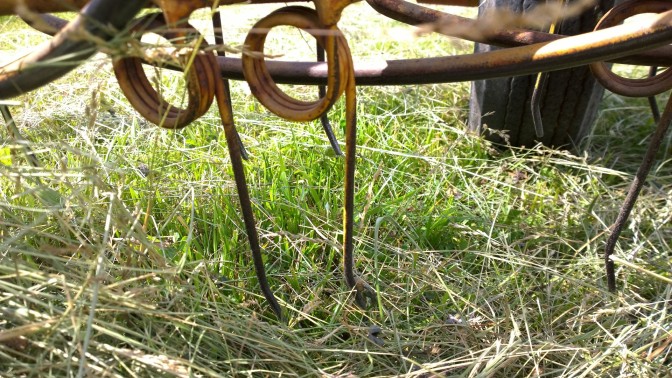 These tines sweep the hay inward as the tractor moves forward. I begin driving counterclockwise to sweep hay away from the outer edge of the field. Once all the hay is off the edges, I turn around and travel clockwise for the rest of the way through the field. On the first clockwise pass, the hay is swept on top of the preliminary row to provide a gap for the tractor tires. With this small rake, the gaps are narrow, but they give us enough room to navigate without trampling the hay the entire time.

Once I finished raking that field, Dad put up some small square bales for a neighbor before beginning round baling. Once he was done with the small bales, I rolled them to the center of the row so they were out of the way of the round baler. (Not the most fun I’ve ever had. Those things were damp, so they were heavy.)

As we stacked them in the shed, we spread salt over the bales so that the moisture would be drawn out. (If hay is wet when it is put in the barn and the moisture never leaves, a fire could start.)

This is the finished product of that first field, picture taken the next day on my way to rake my second field.

So that was a couple of weeks ago, when I first started in to this year’s hay baling adventure. This past Thursday, I worked on a third field. The area in the foreground was a little rough, as we can see by the clumps of dried grass.

A dog that had been hanging around my great-uncle’s for the last few days ran alongside the tractor for several rounds. 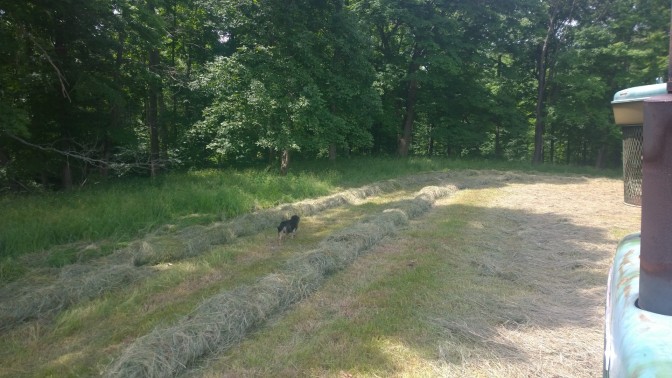 He was fun to watch. He’d run through the rows, tongue lolling, and then dash into the woods, and the next time I’d see him, he’d be wet from the creek.

In one shady spot, I nearly raked up a black snake. It was a long, beautiful snake, and that’s quite a compliment coming from someone who really doesn’t like being around them. She slithered from the scattered hay ahead of my tractor wheels, then curled herself around to look at me, tongue flicking, eyes angry. I stopped the tractor to watch, wonder-filled and safely out of reach. She and I looked at each other for a long time as she assessed the situation and the nature of the threat, and then she turned her head and slithered smoothly under the next windrow over. I watched her tail disappear and thought, Wow. That was cool.

Around 1 p.m., I needed to take a break and rest in the shade amongst the windrows, taking care that I was far from the snake’s hideaway.

This is a close-up view of a windrow, so named because the wind will go through and dry up the hay even more.

The view from my resting place was pretty spectacular. 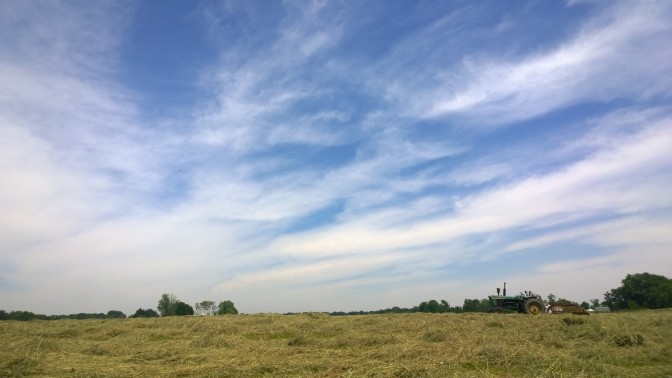 Then it was time to once again climb aboard the tractor and rake on. Soon, I had the entire field done. And it was time to take a longer break and cool down a bit before starting on my fourth field of the season. So I headed home and gave the dog some extra water.

Then it was back to the barn to pick up the tractor. But first, I lathered on the day’s third application of sunscreen. (“You’re as pale as milk. It’s the way of the Scots.” Reference?) And, this day, I was reppin’ the Enough Movement, which empowers people to advocate for a food-secure future because “food security is a solvable problem.”

So I entered the field….

And started in. The field is bordered by a fence and a road, so it can be difficult to rake the outside rows well.

I often had to stop to pick up plastic bottles that had been shredded by the mower.

(Please do not throw trash along the fields. It finds its way into the machinery and hay, and we have to get off the tractor and pick it up. The constant up-and-down can be exhausting.)

I had made windrows in about half of the field before I looked at my phone to discover a text instructing me not to rake this particular field after all. The baler wasn’t going to reach it. There wasn’t enough daylight left. 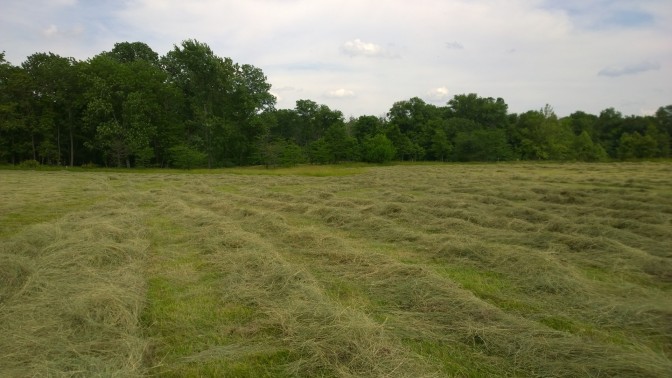 So I left and headed back to the barnyard and parked the tractor, only to discover a WD-40 can I used earlier that day had dropped from the floor of the tractor into the fourth field. I said, “Oh, Classic Me,” and hopped in the Ranger to look for it. I couldn’t let the can be picked up by the baler, where it could damage the machinery or explode under the pressure of the creation of a hay bale.

Trying to find a can of WD-40 in a three- or four-acre field of windrows is basically the same activity as seeking a needle in a haystack. My first try was to no avail. I trundled back to the barn to pick up a herding stick from the barn to poke at the hay. I’m not entirely sure how I thought this would help, but I hoped my random sampling method would enable the stick to poke the metal at some point. 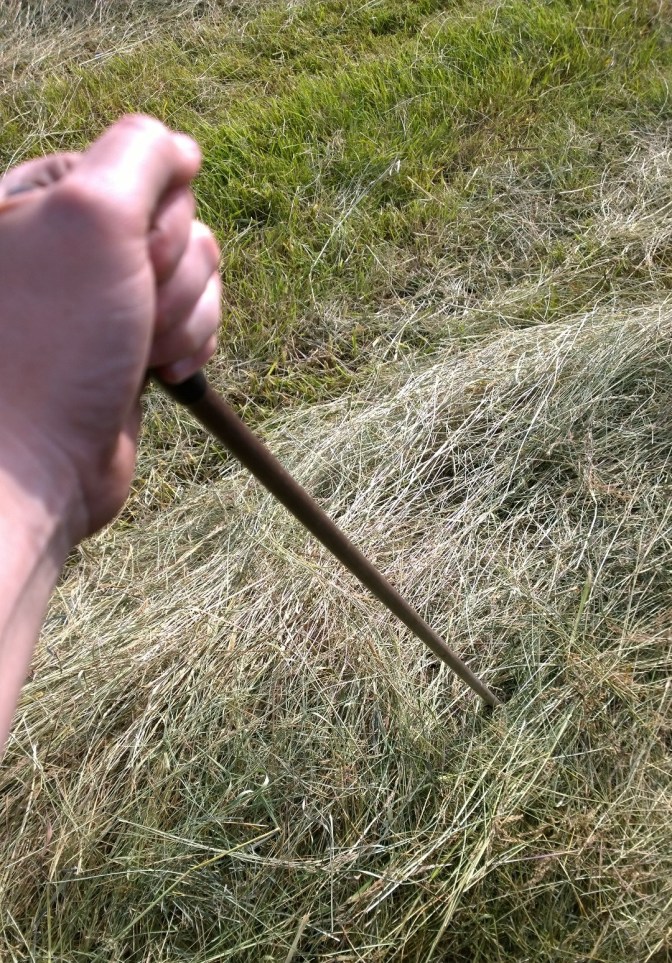 I still didn’t find it and drove back to the house to discover my great-aunt owned a powerful magnet on a stick, so the magnet and I zoomed back to the field for a third look around. (The can still wasn’t found, but the next day, Dad found it lying near one of the windrows as he was baling.)

That night, I didn’t cool down until 1 a.m. I am one of those people who loves the winter and enjoys the snow, and how long I take to cool down after a day in the hay field is one of the reasons why.

I was unable to take a picture of the finished products of those two fields, as it was raining the next morning and I ended up working on another project, but I can tell you it looked pretty.

And so I drive off into the sunset (hypothetically speaking) and wait for the next field to be cut and for the grass in these four fields to grow up so I can make the rounds again.