We are at last into Christmas break. Yesterday was our final day before a week and a half of staying home and eating a lot of cookies. As always, I will have to do some grading, but I will at least be able to do so at my own pace, a little each day.

Monday was a nice, relaxing day at work because I stayed in one place rather than traveling between school buildings. Last week, I graded stacks of homework as students worked on their final projects, and I felt more at ease because I had all that done.

During third hour, my 8th graders were quite comical. Their projects were to be shared with me via Google Drive, and during second hour, I had written “Share to: browne” on two separate lines on the board so they would know what my user name was. When I walked into the classroom right before the bell rang for third hour, one of the students raised his hand and said, “Miss Brown, why does the board say ‘Share to brownies’?”

I narrowed my eyes, trying to figure out what he was saying, and then I looked toward my writing. He had added an “i,” an apostrophe after the e, and an “s” to my username. Despite the grammatical error, I started laughing and shook my head, just looking down at my laptop as I tried to take attendance.

The students continued to discuss the sentence. One said, “It should say, ‘Share the brownies!'” There was fervent agreement, then a hopping up to the board to write “Share the” in front of “brownie’s.” Everybody laughed and asked, “Where are the brownies, Miss Brown?” “We want brownies!”

The final addition was a hashtag in front of “Share the brownie’s” to make their cry for dessert a cause. 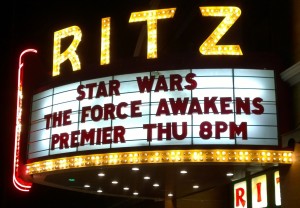 The premiere of Star Wars: The Force Awakens came to our small-town theater last Thursday (the day before it came out nationwide). My brother and I attended. It was thrilling in so many ways. The film was one of the most beautiful works of art I’ve ever seen. I won’t say much beyond that in case not everyone has seen it yet, but we are going to see the movie again in the same theater tonight, the first time I’ve gone to see a movie twice while it was still in theater.

Even the marquee was the most beautiful marquee I’d ever seen.

The FFA chapter held our annual Christmas party last Thursday before the Star Wars premiere. Part of the celebration included making blankets to send to Riley Children’s Hospital in Indianapolis. Two days prior to the party, I headed to Walmart to purchase the material.

I had never done anything like that before, and we needed a lot of fabric. I became frustrated because I couldn’t tell how much material was on a roll. I kept needing to go back to the shelves and pick out more.

It turned out the timing was right. I had been there for at least 20 minutes when a woman came up to wait for her turn to have material cut. We started to talk and I explained what all the material was for. She then asked how much money I had racked up in purchases. I added it all up and told her.

When I had finished my order and was ready to go, she held out a plastic dinosaur-shaped Walmart gift card and said, “It has about $28 on it, use this.”

I thanked her emphatically, and she said, “My nephew wouldn’t be alive if it weren’t for Riley. He was born weighing one pound, and now he’s 30.”

All I could say was, “Wow,” and “Thank you,” again, and as I walked away, I almost began crying. In Walmart? I thought. Really?

I think a tear or two may have snuck down my cheek once I sat in my car and I found a good song on the CD playing.

Monday, I stapled the dinosaur gift card to the cork board at the front of the ag room, a reminder of kindness from a stranger.

And so now, the time all teachers look forward to, winter break. It has come at a good time, as I was reaching a point where I was simply exhausted and ruing the song that starts, “It’s the most wonderful time of the year,” wondering if they had ever been around a teacher who had to figure out finals, grades and how to keep sugar-filled young people on task. For me, this break will be a chance for to plan out the coming semester in hopes that I will be able to stay more than a day ahead this time around. Guest speakers from the agriculture field, the new Habitudes series from National FFA and hands-on activities will certainly be my cup of tea for this next semester.

Happy Christmas to all, and have a Merry Holiday!