To celebrate the Fourth of July, I met up with a fellow American and traveled to Waiheke Island, which is north of Auckland and reachable by a 40-minute ferry ride. It’s a beautiful place, peaceful. We didn’t really have a plan, I just knew I was ready to get away from skyscrapers and busy streets.

My fellow American’s name also is Elise, and she is from Maryland, so she knew about Pennsylvania things like soft pretzels.

Here is a view from the beach by Oneroa. What I thought were rocks were actually piles of seashells. 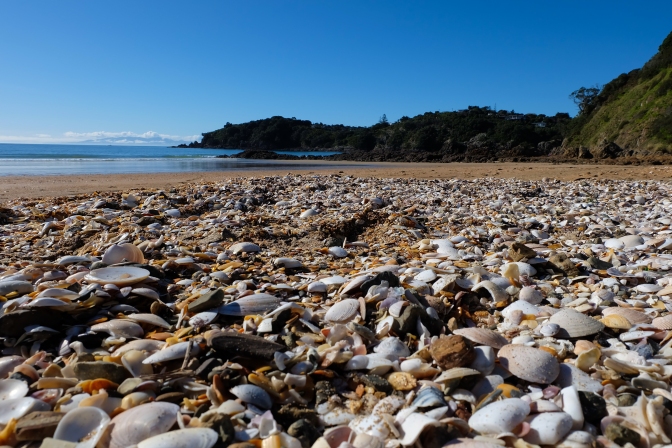 There also were large dried lava deposits on the edges of the sand.

The lava had barnacles, so I felt like I was crushing communities when I stepped onto the rocks. But don’t worry too much: as far as I could tell, they were ghost towns.

I wondered if it would be un-American to eat fish ‘n chips on Independence Day, but I’m in New Zealand, and they had kumara (sweet potato) chips (which I kept calling fries in one conversation, I need to get out of that habit), so I purchased some fish ‘n chips. We ate at a place called The Local, which has a motto of “Sea. Food. Eat it.” I approve. I would fly back to New Zealand from Indiana just for the food served there. It was fantastic.

So was the view. 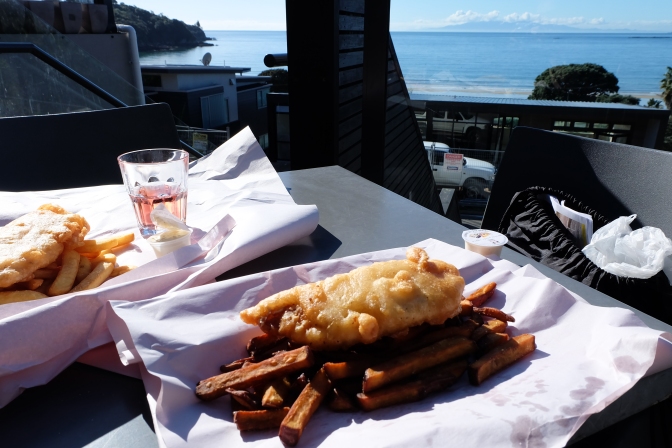 As we ate, a Western Australian who traveled around New Zealand shearing sheep for a living talked sheep with me.

After that, a fellow Boilermaker who was from Chicago came up to say hi because she’d seen my Purdue knapsack.

Then, we headed down to Onetangi Beach via a bus and walked the whole length of this beautiful beach. 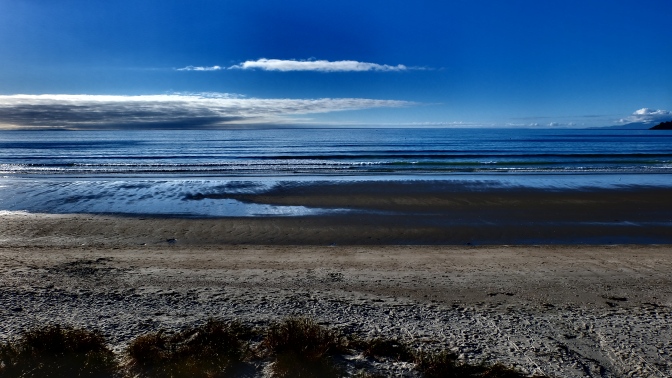 Towards sunset, we headed back to the ferry, where skeptical birds greeted the crowds.

Here is the view upon arriving back in Auckland.

There was a severe culture shock coming back from Waiheke and diving into the crowds on the sidewalks headed home from a day of work. But it was a fantastic Fourth of July for two Americans in Auckland.

2 thoughts on “Independence Day on Waiheke Island: A Photo Essay”