A week ago, I finished a three-week stay on a small farm outside of Christchurch where I worked for accommodation. I fed the animals, administered medications, gathered food, delivered firewood and helped renovate the farm house, which was damaged in the 2010 and 2011 earthquakes. The 2010 earthquake had taken place at night and had not caused many injuries. However, the 2011 earthquake, which I had heard of, but didn’t pay much attention to, leveled central Christchurch. Insurance adjusters, even five years later, are still making the rounds to assess damage, the rural areas being the last to be examined. A New Zealand shortage of engineers and soil scientists had resulted in an influx of international experts entering the country shortly after the earthquake, but even now, there isn’t the manpower needed to make a quick recovery.

I didn’t understand how much damage the earthquake had done until I arrived. I kept hearing about how much had changed in Christchurch, but didn’t really understand it until I visited and lived in the area. I had imagined an international city to be bustling, but Christchurch has been quiet. I would try to find stores, but the directions were wrong because of the earthquake. The shops didn’t exist anymore or had moved, and the maps hadn’t been updated.

In a book shop, I’d once flipped through a book with pictures of the earthquake, setting it on the shelf a minute after opening it. But a couple of weeks ago, I slowed down and studied some before and after photos to better understand what had happened. I found pictures of a cathedral downtown I had passed, which is still undergoing construction.

I also found a photo of Colombo Street, which I’ve often driven down, and the destruction it faced.

Colombo Street, a street I often traverse, before the earthquake. Source: Rotary Response

The Washington Post provided even more “Before and After” photos shortly after the quake that told a heartbreaking story. Nearly 300 people died in the disaster. Even now, there is fierce discussion on how to renovate downtown on the editorial pages of The Press. Some letters to the editor say that any old buildings should be completely torn down, despite their historical significance, and completely new buildings constructed. The cathedral above is sometimes the center of this debate. Others disagree, and so reconstruction is slow.

The earthquake caused dominoes to tumble throughout the globe, and it may have been a factor in the fall 2011 earthquake that occurred while I was in Pennsylvania (I didn’t actually feel it, but friends did). Earthquake recovery has been and will continue to be a long process. It was neat to think I was helping in some small way with a bit of painting for the farmhouse renovation.

The farm where I stayed had pigs, chickens, sheep, cattle, cats, and a goat named Milo. The food we used included vegetables, bread and other edibles that were being thrown out from grocery stores and cafes. Any extra food from the house went to compost or to food for the animals.

While here, I’ve learned that there is a cat shortage in New Zealand, so the ten kittens that were born recently were in high demand. It is hard to find cats to keep as pets, so those who would like to do so jump at the opportunity to purchase a friendly kitten. Kune Kune pigs and firewood also are sold here.

One of the neatest aspects of staying where I did was that there were several other travelers staying there as well. At one time, there were 11 of us, and we were from France, Germany, New Caledonia, England, Holland and the U.S.A. We cooked and ate together, and I learned how to make several dishes, such as quiche.

I mostly took pictures of the sheep. 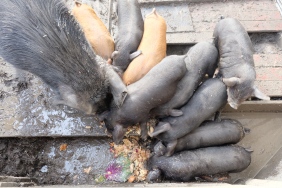 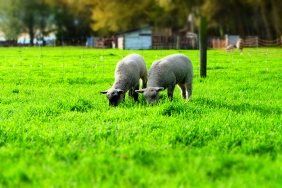 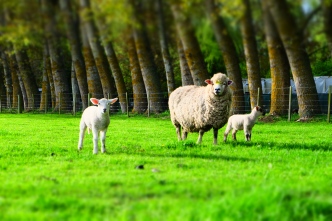 It’s interesting to think that a disaster I barely paid attention to when it happened because I’d just heard of the city has affected a piece of my New Zealand trip. I’ve started to learn the geography of Christchurch and have enjoyed the city and what it still has to offer: a beautiful art gallery, nice restaurants and hospitable people.

Now, I’m being hosted by hospitable members of the church here. Last week, I attended the New Zealand Grassland Association conference and subsequent tours and am still sorting through the nearly 1,000 pictures I took of grass, cows and landscapes. I’m hoping to post some of those soon.