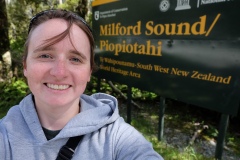 Well, I cleaned bathrooms, made beds and vacuumed floors, as well, but this story happened in the kitchen.

For nearly the entire month of December, I worked in Milford Sound, part of Fiordland National Park. The type of farm work I was looking for had dried up, and I needed a good place to wait for the next assignment. Via an online job board for travelers in New Zealand, I read an advertisement from a lodge in Milford Sound. The lodge was seeking people for housekeeping, dish washing, and cleaning. I emailed the contact listed and was accepted for December. So after my kiwi and constellation adventure in Paihia on the North Island and an absolutely brilliant Coldplay concert in Auckland, I headed to Milford Sound.

The beginning of the Homer Tunnel.

The drive from Queenstown to the lodge was incredible. The road wound past lakes, rivers, mountains, rocky streams, and canyons. At times, the blacktop hugged the sides of rock faces. Not far from my destination, I hit a 1.2 kilometre (.75 mile) long tunnel where an electronic signboard counted down the amount of time left until cars on this side of the mountain could enter. While I was waiting, a colorful kea strutted over, looking for food or something to steal. Then, the light turned green, and I drove through the dark tunnel, water drumming against my car’s metal roof.

At the end of the tunnel was a different world. Waterfall after waterfall streaming down deep gray mountains filled my windshield.

The lodge was located in a valley by the Cleddau River and included rooms for backpackers, chalets along the river and in the forest, and sites for camper vans. The lodge also included a cafe with really good food we could eat when there were leftovers. The brilliant blue river rushed along the mountains, which towered straight above us. When it rained, waterfalls would cascade down the rock faces, new waterfalls forming every few minutes. Thunderous roars could be heard from the parking lot.

The nearest grocery store was two hours away and the people who lived in Milford Sound work in hospitality, tourism, and supporting occupations. Visitors travel from around the world to see the fjord and surrounding mountains, and the Milford Track is considered one of the Great Walks of New Zealand. 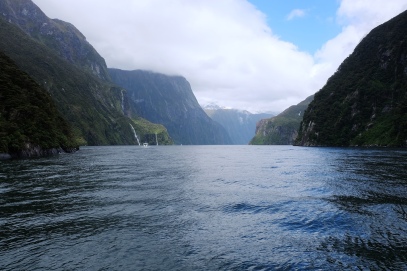 Milford Sound as viewed on the cruise I took after working for a couple of weeks. This scene would have greeted the first Maori to have reached the area as they traveled inland from the Tasman Sea.

It was the perfect place to be in December. The weather was cool, and there was snow at the peaks of the mountains for a somewhat white Christmas. I could experiment with my camera, trying new shots with settings I hadn’t really worked with before. I went hiking with friends and fellow staff members and on a cruise through the sound where the skipper drove right up to the side of the mountains so that we could touch a tree bending over the water or become soaked by the waterfalls.

On a clear night, the Milky Way streaked overhead, mountain to mountain, white lights dancing along the summits. My eyes could barely pull away from the stars when the clouds let them through.

And the clouds did not often let the stars through. Milford Sound has 200 rainy days in the year, and the weather over the three weeks I was there varied. I saw beautiful blue-sky days and days where the wind howled and the rain crashed against the lodge roof. For a couple of days, pea-sized hail struck us as we’d hurry to and from our cleaning assignments.

The staff was composed of nearly all international travelers. Along with New Zealanders, there were people from Ireland, Australia, Canada, England, Poland, Mexico, Chile, Argentina, Sweden, the U.S.A., France, Colombia, Japan, and Germany. We worked together on cleaning rooms, making beds, vacuuming carpet, mopping floors and more. The shifts I worked most often were housekeeping and dish washing. Both gave me the opportunity to listen to music nonstop and write blog posts like this one in my head.

Some of the staff after singing Christmas carols with the lodge guests.

With so many people far from home at Christmas time, we put together several events to celebrate the holidays together. We decorated the cafe and staff house, held a staff party, sang Christmas carols with the lodge guests on Christmas Eve, ate lunch together and dressed up as Santa and his elves on Christmas Day, and made a Christmas Day dinner for 120 people (I was on dish duty that day and could eat the extra truffles and cheesecake and ham….).

We were used to making dinner for many people. Every night, there were nearly 30 people to feed, so we shared evening cooking and cleaning responsibilities. Two of us would work together. The best part about it was that there were many good cooks and some professional staffs in the rotation, so we ate well every night.

On my assigned evening, my fellow staff member took charge of the bread and main meal, an Indian dish. I wanted to eat something American, or at least something to which I was accustomed, so I decided to make banana bread.

My recipe would only make three loaves of bread, and I would need to provide much more dessert than that. So I doubled the recipe and used a commercial-sized baking pan, and the banana bread turned into a cake.

It took me twice as long as usual to make the dish because of the conversions I needed to do: cups of butter to grams of butter (I miss having sticks of butter instead of huge blocks) and Fahrenheit temperatures to Celsius. I also was lost in the kitchen and couldn’t find some of the ingredients I needed, asking multiple people where things were.

Because it was my first time cooking or baking for 30 people, I asked someone to take a picture of me with my cake.

I finally put everything together and placed the cake in the oven to bake for an hour.

It was my first time cooking for 30 people, and I could not believe the reaction I received.

When one of the chefs tasted it, he said, “Wow.”

One staff member who worked the late shift came in really excited about it because he’d tasted a little of it already.

Then, that night’s dinner chef came in. He tried it and liked it, and then realized I’d made it, and said, “You made this? By yourself?” That chef and several other members of the staff really only knew me as a dish washer in the cafe, as that was the only time I worked with them.

When I said yes, he yelled, “Yeah!” and started clapping. One of the other kitchen team members said, “You need to write down the recipe and post it on the board.” I didn’t think he was serious, but then the dinner chef echoed his sentiment and added, “We’ll use it for custard tomorrow.”

So I wrote up the recipe.

But I was just a dish washer….

Milford Sound is an absolutely beautiful place, and I never stopped looking up to the mountains while I was there. Somehow, they always looked different, whether a sunny day with almost no waterfalls or a grey day with sheets of hail nearly masking the rock faces and torrents gushing down the steep slopes.

My last shift as a dish washer/housekeeper/cleaner was yesterday. I’m leaving Milford Sound today. Words cannot describe all the experiences I had while here. Photographs bring more justice to the place. So here are some photos to try to convey the beauty, majesty, and inspiration Milford Sound brings to all who work or travel here.