A Few Thoughts from the Philippines

First, here is a picture of a bird standing on my head:

I was visiting Davao Crocodile Park, and a man held the two birds and asked, “Picture, mahm?” I thought he meant that I would be in a picture with the birds while he held them, but then he explained that they would perch on my arms. Readers may remember my previous adventures with birds in New Zealand, and I became ridiculously excited at this chance for another up-close wildlife encounter.

One even gave me a peck on the cheek while it sat on my shoulder.

It’s hot here. The funny thing is, I haven’t minded it. It’s been nice. I’ve been so cold over the last several months in New Zealand and Australia that I feel like I’m dethawing. So that’s good. However, I could not live in this heat forever. (For one thing, it’s doing a number on my hair.)

I’m staying with a family from Indiana who is working at an international school in Davao. The first weekend I was here, I attended a retreat with the staff of the school. During one conversation with some staff members, I was asked why I wanted to return to Indiana rather than stay in the Philippines.

The family I’m staying with smiled and said an author named Rachel Peden wrote about this very phenomenon, saying that Hoosiers (people from Indiana) who are asked why they stay in the state say, “Because of the four seasons.”

The school staff retreat was located at Eden Nature Park. It was a relaxing weekend and included activities such as ziplining, skycycling, and horseback riding. 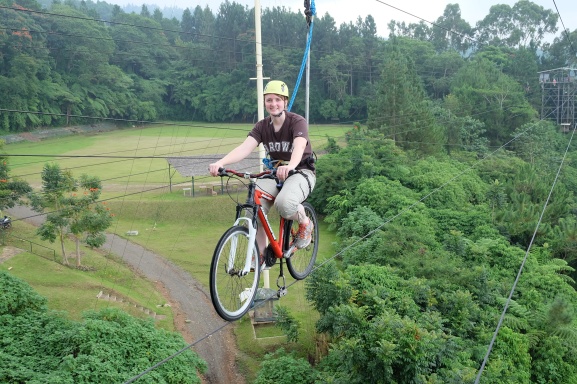 The cheapest cost in retail here is labor, so there are many more people working in Philippine stores than American stores. Workers will earn about 30 pesos per hour, which equates to around $7 USD a day.

It’s an entirely different culture than my own and the one I lived in for the last year. There have been some awkward moments when I accidentally called someone “sir” (I’m not supposed to do that) or when a complete stranger asked me my age and I wondered what that was about (it’s generally not an acceptable practice to ask a woman her age in the U.S., especially by a complete stranger) or in trying to learn about all the transportation systems, but overall, being in the Philippines has been a good experience. Filipinos are friendly people. Davao taxi drivers have a good reputation.

I haven’t left Davao City. Geographically, it’s the largest city in the world. Being in the city for a long time can be too much for me, but I’m able to walk down the street and see goats, water buffalo, chickens and pigs within a short walk.

One of the most interesting things I’ve learned is that some of the Filipino beauty products include ingredients intended to whiten skin (or at least, they say they do). Fair skin is a desirable characteristic here. Yet, on the flip side of that coin, white Americans go tanning or use products to darken skin. (Please note I am not saying that any of these things are wrong. There’s just a contrast there that’s fascinating to me.)

Some of the food made me sick at the beginning, not because it was bad, but it was so different that I had a hard time with it. So when I ate mashed potatoes yesterday at a Swiss deli, my stomach was very happy.

Speaking of food, there’s this fruit here called durian. Locals say it tastes like custard. I tried it. It did taste like custard, until it didn’t. The latter part didn’t go well.

This area is called the fruit basket of the Philippines because the soil and the climate are so good.

Buko juice, a coconut drink, is good, and I’ve had it several times. It’s refreshing in the heat.

I really enjoyed visiting the market here, and there are several photos from there below. From an agricultural perspective, it was interesting to see the difference in how food is sold here vs. at home.

I didn’t realize how much I missed summer thunderstorms until one spectacular Friday night lightning show. Walking out of a mall where we had gone to see a movie, we watched electricity fork overhead, and I jumped up and down when I saw it. Humidity was heavy, and then the rain poured and poured. We rode home in a trike bike (a motorcycle with a roofed side car that can carry several people), and I watched out the back as we splashed through puddles.

Here are some more Philippines photos to end on: