Where I Can Breathe

This blog post is the result of a joint adventure shared with The Rewriter. We previously did this for Purdue University’s Spring Fest. The way it works is you can read her account first, or mine, and then visit the other one!

Frodo sits along the Pacific Ocean on an Otago, New Zealand, autumn day.

I spent some time toward the end of my trip thinking about constants. I didn’t have many constants over the last year. I had consistent intangibles, like support, communication with family and friends, and people I could always go back to, but my surroundings and the people in them changed frequently. My only tangible constants were a ripped suitcase, a grey backpack, and a fuzzy toy kiwi named Frodo. Everything else was new every day, every week, every month. It was exciting!

Yet, it also became exhausting. I thought a lot about sleeping in the same bed for more than a few nights in a row, my own pillows, my own blankets, and various other creature comforts.

These are things I have reveled in, being home.

In some ways, it feels like I never left here. I know I’m different and that people change, but the places I frequented are still here. The day after my plane landed, I attended a high school football game. The lights shone, my cousins stood near the north end zone to watch the game, the band played, and colleagues from two years ago scurried around the field and school building, preparing for the game. The place hadn’t changed.

Walking through the hallways before the game, I found my friend L, still in her classroom, grading final stacks of papers before submitting end-of-quarter grades. I opened the door and peeked slowly around the corner. She lifted her head, looking exhausted, and slowly said, “Yes?” I ran and gave her a big hug, saying we needed to catch up.

It turned out that the school’s fall break was scheduled for that next week to coincide with the county’s biggest annual event, the Covered Bridge Festival. 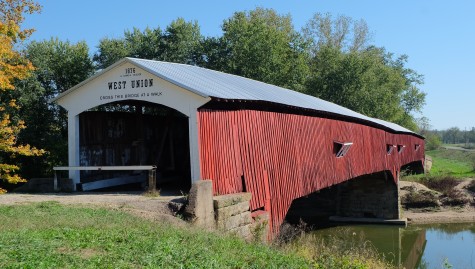 The West Union Bridge, the longest in the county at 315 feet. At the time covered bridges were built, there were no waterproof coatings to prevent wood from rotting, so the builders constructed sides and a roof with shingles to protect the planks.

The ten-day Covered Bridge Festival is a celebration of history, harvest, food, and natural resources. It’s named for the county’s 31 covered bridges, and the area is known as the “Covered Bridge Capital of the World.” Over two million people visit the county over the ten days, a place with a population of less than 17,000 and only five stoplights. During high school, I served as a festival tour guide, telling the area’s story while riding on a bus to various towns and bridges with 30-40 visitors.

L and I decided to join in the celebrations of this ten-day-long festival, only we would attempt a twist: we would pretend to be tourists instead of acting as locals.

L drove. It was the safer option because my jet-lagged brain switched back and forth between left-hand and right-hand driving. So she picked me up in her car, The Blueberry. Frodo joined us, riding on the dashboard. As one of my few constants from the last year, it was only fitting that he was here for one of the most significant constants of my life, the Covered Bridge Festival.

We drove under a cloudless expanse toward the county seat, meandering to the tourist information booth upon arrival to pick up a map. After a stroll through the arts, crafts, and food tents, we laid the map on a picnic table to plan our route. We picked a couple of routes that wound through parts of the county we never or rarely saw. 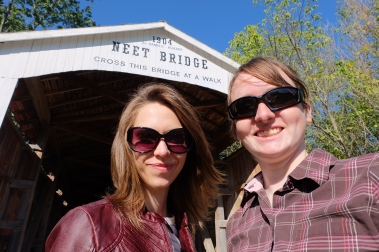 At each bridge, we took a picture together. Here is the Neet Bridge. You can imagine all the puns when we stopped here with a tour group…

At each bridge we visited, we admired their color, the Burr Arch construction on the inside, and their rich histories. Some bridges could be driven through, while others were open only for walking. Frodo waited patiently in the car, as he was still acclimating to the Indiana weather.

We soon arrived in one of my favorite towns, one of the most popular festival destinations, full of interesting buildings, art and antiques. The Blueberry and Frodo caused scenes as we tried to find free parking there. We first drove past a $4 parking lot, which was next to a $3 lot, which was next to a $2 lot. But then we crossed a bridge and turned down a side street and tried to drive The Blueberry through thick crowds, a harrowing event for the intrepid driver. Finding no free parking, we had to turn around and return to the $2 parking lot.

I handed over a bill and the worker taking money took one look at Frodo and said, “What the heck kind of a bird is that?”

She didn’t answer, just passed back the change for parking and said, “Have a good day!”

I’d visited that town as a kid and had taken people there for festival tours, yet I felt like I was seeing it for the first time. I snapped several pictures of the waterfall and the covered bridge, and the smell of the flour and bread mixes in the mill made me smile. I breathed it in deeply, chattering to L about how much I loved that smell. 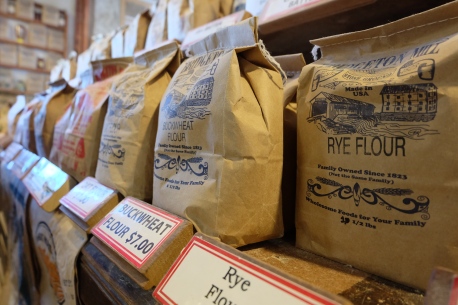 A row of flour produced at the town mill.

I felt revived, like I could breathe anew in that town.

And it’s a town that knows how to breathe anew.

When I was in high school, an arsonist burned down the town’s 137-year-old bridge by pouring an accelerant and lighting a match. He was on his way to burn down another bridge when he was apprehended.

It came as a shock, one of the most beloved bridges in the county gone.

Yet, the bridge was rebuilt in less than 18 months.

In a way, that’s what happened to me.

I was burned down, then rebuilt over this last year of travel.

It was like the new bridge and I had a connection that way. Walking along the creek below the waterfall, I didn’t truly understand why I felt so at peace, so joyful, so alive.

But it’s because I was in good company there, and I could breathe.

Since both L and I enjoy art, old buildings, and antiques, we spent some time poking around the hundreds of stalls lining the streets and tents. We found several treasures.

But the one that struck me most was this:

It was one end of the original bridge, a remnant from a fiery past. I stopped and stared.

We left that town after buying giant cinnamon rolls, a treat I’d missed in my overseas travels. As we drove past soybean fields and woods, hundreds of shades of greens, yellows, and oranges in the trees, and stopped at more bridges, L softly reflected, “This is the first air that I breathed…Indiana…and everywhere else seems off…at first.”

Perhaps that’s why, when I touched down in Indianapolis, a deep sense of relief washed over me. Perhaps that’s when I started truly breathing again. The final lettering on the end of my new bridge was in place.

That was a constant.

I’m back in the land of those constants, and I am still happy to be home.

But that’s just my side of the story. Here’s L’s.

Frodo reflects on this strange new land of America.