Grief on the Farm 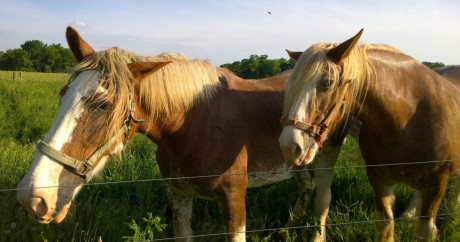 I lost my chickens last Sunday.

We lost a newborn foal on Monday.

We lost our mare, KT, on Tuesday.

The mare looked fine after she foaled on Monday, and it was her fourth foal. We called the vet, they told us what to look for, and it looked like things would be okay.

Tuesday evening, we went out to take her temperature, and she was gone. She must have had a slow bleed or an infection we didn’t see.

She was a beautiful mare, and I liked her personality. Lots of spirit. We had put one of her foals, a two-year-old gelding, in the pasture with her on Monday, and Tuesday, when I stared down at the mare, gone, he came over and stood with his muzzle on my shoulder for a good while.

Since then, I’ve heard several stories of mares that were lost after foaling or chickens eaten by predators such as minks or raccoons.

Grief on the farm is real. We tell ourselves that we know what animals are meant for, we know about the circle of life, we know that all good things come to an end…but that doesn’t mean it doesn’t hurt when we do lose animals. I plan on finding more chickens, but there is always something special about that “first batch.”

And at the end of the week, Saturday, while I was in the barn doing chores, I found a perfectly formed baby hummingbird with glossy green feathers and long beak dead on the ground in front of the horse stalls. I just stared at it for a while, remembering a photograph I’d seen in New Zealand. It was taken by Grahame Sydney, a picture of a dead quail in the snow, a portrait that was both beautiful and sad.

The hummingbird may have tried to fly, but it didn’t make it, and this was both beautiful and sad.

“Life beats down and crushes the soul and art reminds you that you have one.”
~Stella Adler, American actress and acting teacher