In my previous blog post, I talked about the beginning of this endeavor and “Reasons to Build a Chicken Tractor.”

Once the frame had been put together, we began to build from the ground up using mainly 1x3s.

I had laid out my specifications for the project in the beginning: a portable pen and coop with a ramp, hanging feeder, and suspended water bucket that would move with the structure. Toby’s Human (TH) researched how to make it all happen, finding chicken tractor designs via backyard chicken websites and university poultry research units. He melded elements from several blueprints.

Later that day, he showed me his notes and drew out a blueprint of how large and unwieldy a tractor with all of my specifications would need to be to accommodate 50 chickens comfortably. After discussion, I agreed to stick with 30 chickens (that didn’t happen, as my sister-in-law gave me 23 more chickens three months later [I keep them in my smaller chicken house]), and the official designs began.

The coop, the chickens’ living room, began to take shape. 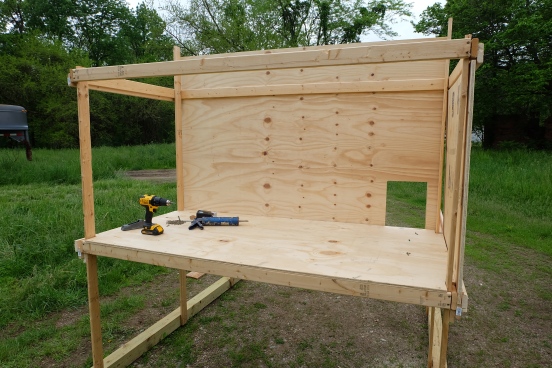 When the boards locked in, the coop was so strong that TH climbed up into it.

The square through which he looked became the entrance to the coop, which was secured with a small sliding door. A ramp, with its base elevated high enough off the ground to move with the chicken tractor, gave the chickens easy access.

I steadied boards across the truck tailgate to coat them in waterproof stain.

That board became one of the coop’s two sliding doors, the coolest aspect of the project (TH came up with it in the midst of designing the coop).

We also added a plywood roof and used FlexSeal (“As Seen on TV”!) to waterproof it.

The open space in the middle was covered with hardware cloth, giving birds the opportunity to do the “Chicken Dance” in the rain.

TH climbed up on the roof to waterproof the top of the coop and install vents so that the chickens could breathe while inside.

Another cool aspect of the project was the nest box at the back of the chicken tractor. Eggs would be easily accessible: the chickens would lay them in the nest box, and the farmer would lift up the lid to collect them.

Shower liner was glued to the floor of the coop and nest box to make them easier to clean.

Around the perimeter, hardware cloth provided protection for the chickens, keeping predators such as coyotes, raccoons, foxes, and snakes out.

With all of these pieces coming together, we were nearly ready to move the chickens in.

See the finished product and happy chickens on grass!